The second movie we are undertaking has been quite an amazing challenge. It is What's Cooking?, a 2000 film by British director Gurinder Chadha, better known for Bend It Like Beckham. For her first film about life in the United States, she chose as her theme the quintessential American icon—Thanksgiving. Ironically, she tells her story from the point of view of four families who are not fully accepted into the mainstream of American life, showing how their Thanksgiving dinners, like their lives, are a blend of what they brought with them and what they found when they arrived. But what makes it difficult for us is that she depicts FOUR full Thanksgiving dinners!
The four families are the Avilas, the Nguyens, the Seeligs, and the Williams. We decided to start with the Williams' family dinner, which consists of the following:
Organic Turkey
Mrs. Williams’ Special Oyster and Shitake Mushroom Stuffing
Grandma Williams’ Favorite Macaroni and Cheese
Garlic Mashed Potatoes
Cranberry and Orange Mêlée
Candied Yams
Asparagus with Beurre Blanc
Romaine and Radicchio Salad
Homemade Buttermilk Biscuits
Moroccan Fruit Compote
Blueberry Pie with Graham Cracker Crust
Gwennie Robbins’ Fool-Proof Rustic Pie
Fruit and Nut Cheese Ball with Plain Crackers
Sage and Onion Cheese Ball with Wheat Crackers
Champagne
Orange Juice
Coffee with Whipped Cream
Red and White Wines
That's quite an amazing lineup! But if you're looking for an elegant Thanksgiving meal, then this menu will certainly fit the bill. Just look at this magnificent salad: 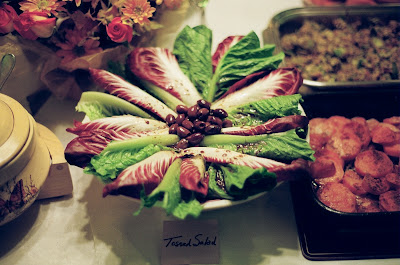 Wash the romaine and the radicchio and pull apart the leaves, placing the leaves in two distinct and separate bunches. Score the cucumber with a fork (it looks decorative!) and cut into round slices. Place them in the center of a large bowl. Slice the tomatoes into wedges and build them around and on top of the cucumbers in the bowl. This should create a good base near the top of the bowl to create the romaine/radicchio design, as follows.
With the furrowed side down, and the root end pointing to the center of the bowl, create a pinwheel design of red and green, alternating the radicchio leaves with the romaine, folding in the sides to make a tight arrangement. Place the handful of olives in the center, enough to cover the variety of leaf ends. Drizzle the balsamic vinaigrette over the salad; toss just before serving.

Yield: 8-12 servings
What's Cooking? is a wonderful movie, and the meals depicted really made us hungry! We can't wait to try the other three families' Thanksgiving dinners.
Posted by Anthony F. Chiffolo and Rayner W. Hesse Jr. at 1:17 PM