Feast Your Eyes on These Pies!

Viewers, beware: just watching the film Waitress will raise your blood-sugar level! The film opens with a mouth-watering montage of incredible homemade pies—peach, apple, cherry, chocolate chip, chocolate pudding, banana and dark chocolate, butterscotch, peanut butter chip and white chocolate chip, even pistachio—and then treats moviegoers to the wonderful story of these delectables.
Jenna, a waitress at Joe’s Pie Diner, is the genius behind the diner’s daily pie specials—both the recipes, which she makes up in her head, and the names, such as “Marshmallow Mermaid Pie,” “Falling in Love Chocolate Mousse Pie,” “Peachy Keen Tarts,” “Spanish Dancer Pie,” and “Jenna’s Special Strawberry Chocolate Oasis Pie.” Jenna inherited her pie-making talent from her mother, who created such interesting pies as “The Lonely Chicago Pie,” “Car Radio Pie,” and “Jenna’s First Kiss Pie.” But Jenna is incredibly unhappy in her abusive marriage, and when she suddenly finds herself pregnant, her pie-muse goes into overdrive, calling forth such concoctions as “I Don’t Want Earl’s Baby Pie” or “Kick in the Pants Pie.”
The wonderful thing about the narrative is that Jenna gives a brief description of each vision as she goes along: thus, “Bad Baby Quiche Pie” is a quiche of egg and Brie cheese with a smoked ham center; “I Hate My Husband Pie” has a pudding filling made from bittersweet chocolate drowned in caramel; “Baby Screaming Its Head Off in the Middle of the Night and Ruining My Life Pie” is a New York-style cheesecake, brushed with brandy, with pecans and nutmeg on top; “Earl Murders Me ‘Cause I’m Having an Affair Pie” is made by smashing raspberries and blackberries into a chocolate crust; “I Can’t Have No Affair Because It’s Wrong and I Don’t Want Earl to Kill Me Pie” is a vanilla custard pie with a banana on top, “hold the banana”; and finally “Pregnant, Miserable, Self-Pitying Loser Pie” is lumpy oatmeal with fruitcake mashed in, then flambéed. (This running narrative is fortunate for the viewer who loves to bake, because the DVD edition of the film does not provide any recipes.)
Fortunately, Jenna embodies humor as well as sadness in her pies: there are “Old Joe’s Horny Past Pie,” which she makes for the owner of the pie diner, and “Naughty Pumpkin Pie,” which she makes for her gynecologist/lover. Nevertheless, she has little faith in her own gifts, as this exchange with Joe indicates:
Joe: Nobody makes strawberry chocolate pie the way you do. Wednesday’s my favorite day of the week ‘cause I get to have a slice of it. I think about it as I’m waking up. Could solve all the problems with the world, that pie.
Jenna: You’re making too much of it. It’s just a pie.
Joe: Just a pie? It’s downright expert. A thing of beauty. How each flavor opens itself, one by one, like a chapter in a book. First the flavor of an exotic spice hits you, just a hint of it. And then you’re flooded with chocolate, dark and bittersweet, like an old love affair. And finally, strawberry, the way strawberry was always supposed to taste, but never knew how.
Or as Dr. Pomatter, Jenna’s lover, rhapsodizes about one of her pies: “It’s bliss.” And that’s an accurate thing to say about this fine movie itself, for all turns out well for Jenna (though we won’t give away the happy ending).

Inspiring Facts:
The toddler who appears as Jenna’s daughter, Lulu, in the final scene is Adrienne Shelly’s daughter, Sophie Ostroy. Writer and director Shelly was as inspired in making this film as Jenna was in creating new pies. Shelly’s talent ranged from adding in the simplest plot details (the five-minute date) to portraying Jenna’s friend Dawn on screen to writing the movie’s theme, a lullaby that begins, “Baby, don’t you cry, gonna make a pie. Gonna make a pie with a heart in the middle….” Shelly’s murder in her Manhattan office was a stunning loss, not only for her family but for film-goers worldwide; despite this tragedy, Waitress, her final film released after her death, is an optimistic view of the resilience of the human spirit and a testimonial to Shelly’s fundamentally joyful outlook on the human experience. The success of the film has helped fund the Adrienne Shelly Foundation, a non-profit that provides film school scholarships and grants to female filmmakers.
Released May 25, 2007
Starring Keri Russell as Jenna, Nathan Fillion as Dr. Jim Pomatter, Cheryl Hines as Becky, Jeremy Sisto as Earl, Andy Griffith as Old Joe, Adrienne Shelly as Dawn, Eddie Jemison as Ogie, and Lew Temple as Cal
Written and Directed by Adrienne Shelly
Awards: Chlotrudis Award for Best Performance by an Ensemble Cast; Newport Beach Film Festival Audience Award for Feature Film and Feature Film Award for Acting (Nathan Fillion); Sarasota Film Festival Award for Narrative Feature (Adrienne Shelly); Southeastern Film Critics Association Wyatt Award 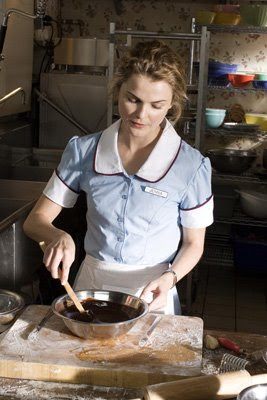