Sorry for the hiatus--we were busy finishing the manuscript, which is now in the publisher's hands. Publication is scheduled for June or July of this year. Yeah!

A few notes on Amadeus:

Salieri: Let me offer you some refreshment. Do you know what these are? Capezzoli di Venere! Nipples of Venus.
(Constanze laughs.)
Salieri: They’re Roman chestnuts in brandied sugar. Try one. Go on, try one! They’re quite surprising.
Constanze: They’re wonderful! Thank you, Your Excellency. 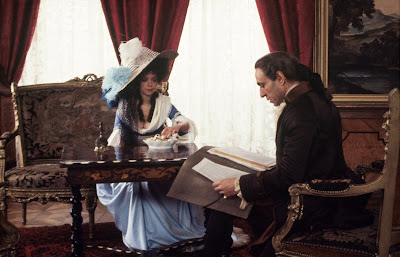 Presenting glorious music to accompany extravagant dishes, Amadeus is a feast for the senses—albeit, for the taste buds, it’s a vicarious feast. At a reception at the cardinal’s palace, Salieri (Abraham) is tempted by a buffet table filled with delectables: pheasant, trout, pâté, salmon mousse, fresh vegetables, chocolate rum balls, Viennese cakes, frosted cookies, and much more. But the most memorable confection appears when Constanze (Berridge) brings her husband’s music to Salieri in secret, and he tempts her with capezzoli di Venere—Nipples of Venus—made from Roman chestnuts and brandied sugar and shaped and decorated to look like women’s nipples. The erotically charged scene serves to underscore the shared sensuality of sex, food, and music—human delights that few are gifted enough to appreciate with complete abandon. 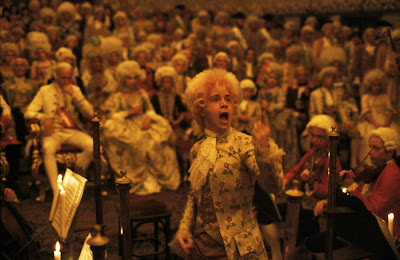 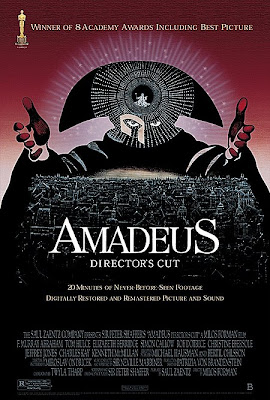 Fun Facts:
According to film lore, Elizabeth Berridge consumed fifteen pieces of candy while shooting the “Nipples of Venus” scene—an overdose of sugar, to be sure, and enough to make one feel pretty sick.

Posted by Anthony F. Chiffolo and Rayner W. Hesse Jr. at 5:44 AM

A masterpiece, a movie that will go with time.