Thanksgiving with the Movies

Many people are interested in what chefs might serve on the holidays at their own homes. After all, if someone spends so much time in the kitchen cooking for others, how much energy will be left to prepare a big meal for themselves?

Thanksgiving this year, for us, was a relatively simple affair. We prepared some tried-and-true recipes from our own book Cooking with the Movies for a small number of guests. Halfway through the afternoon we were asking ourselves, "Have we forgotten something, or have we just become efficient?" because our cooking was well ahead of schedule. But the lack of stress allowed us more time to enjoy ourselves and our company!

We started out with a Tarragon Bread, made in the bread machine. 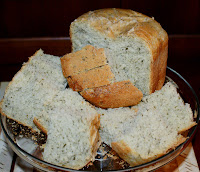 To top the fresh, warm bread, we made some Guacamole: our recipe includes onions, tomatoes, and a few secret ingredients in addition to the avocados.

We also had some select cheeses: New York cheddar and Jarlsberg. 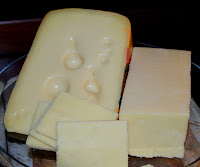 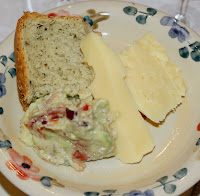 The real appetizer was Steamed Artichokes.

We served them with a vinaigrette for dipping. The basic vinaigrette that we use all the time is one part Balsamic, one part olive oil, 2 crushed cloves garlic, a teaspoon of mustard, and salt and pepper to taste. 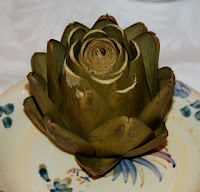 Finally, the turkey: Pavo Méxicano (Turkey Mexican-style).
from the film What's Cooking?
1 23-lb. turkey
Mixed Vegetable Stuffing (see next)
1 c. butter, melted
greens
whole jalapeño peppers
Concord grapes
(If turkey has been frozen, make sure it is completely
defrosted; this may take several days).
Preheat oven to 325°F.
Wash the turkey inside and out, making sure
to remove the neck and giblets that are usually
stuffed inside the cavity of the bird. Pat dry.
Place in a large roasting pan on sheets of aluminum
foil arranged perpendicular to one another
so that the pan is completely covered and
there is enough foil left to lift the bird from the
pan when holding all sides. Stuff the turkey just
before placing it in the oven (as per the instructions
that follow). Bake covered for 4–5 hours,
basting about every 20–30 minutes with melted
butter. (If desired, test with a meat thermometer
to ensure that it is thoroughly cooked [165°F
for inner breast, 180°F for the legs] and safe to
serve.) Uncover and cook for the last half hour
to brown the top.
Remove turkey from the oven and let it stand for
20–30 minutes before slicing. Place the turkey
on a large serving tray that has been completely
laid out with greens, and decorate the perimeter
with whole jalapeños and Concord grapes.

Mixed Vegetable Stuffing
2 c. Vidalia onion, chopped
2 c. celery, diced
2 c. carrots, peeled and chopped
3 c. corn off the cob
3 plum tomatoes, finely chopped
1 c. butter, melted
2 tsp. thyme
2 tsp. parsley flakes
2 tsp. sage
½ tsp. Cayenne
½ tsp. salt
½ c. pecan bits
1½ c. dried mixed fruits
1½ c. chicken broth
4 c. bread, cubed
Mix the onions, celery, carrots, corn, and tomatoes
in the butter; transfer to a skillet and
cook over a low heat. Stir occasionally, until the
onions are soft but not brown. Mix the seasonings
with the pecans and dried fruits, then fold
into the vegetable mixture. Stir in the chicken
broth and simmer for a bit. Add the bread
cubes and mix well. The stuffing should be wet
as it is placed in the bird. Stuff the turkey (but
do not “pack” it), reaching deep into the cavity.
Smear the stuffing all over the top of the bird,
and along its sides. Place leftover stuffing in a
small roasting pan, and cook alongside the turkey,
uncovered, for about 2 hours. 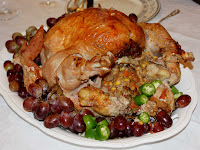 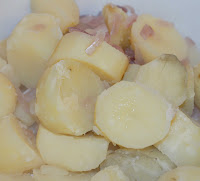 Place the potatoes and onions in a large pot and
cover with water; bring to a boil and cook until
a fork stuck into a potato easily breaks it apart.
Drain the water. Place the potato halves into a
food processor and whip to a fluffy consistency,
adding the milk to facilitate the process. Remove
to a covered casserole dish, and stir in the
onions, mayonnaise, salt, and pepper. Put garlic
cloves through a press, and add to the butter,
stirring quickly. Make a well in the potatoes
and pour in the garlic butter, allowing it to sit.
Mix all ingredients together in the dish as the
first dollop of potatoes is served. Thanksgiving is not complete without cranberry sauce. We made a special Cranberry and Orange Mêlée.
from the film What's Cooking?
2 pkg. whole cranberries
4 whole oranges
1 c. sugar
3 sprigs mint 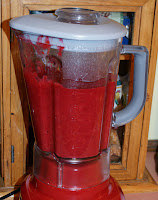 Boil the cranberries until soft; drain and allow
to cool. Zest the oranges and discard the shredded
peel. Cut the oranges in quarters, remove
any seeds, and cut away as much of the pulp as
possible. Put the cranberries in the food processor
with the orange zest, orange slices, sugar,
and mint and blend until a thick, pourable liquid.
Serve at room temperature as a side dish
for the turkey.

Peel, seed, and grate the squash; strip the onions
and grate them also. Transfer the squash
and onions to a colander and press out any
excess moisture. In a separate bowl, combine
eggs, lemon juice, flour, cornstarch, garlic powder,
salt, and Cayenne; add the squash and onions,
and mix well. (If the mixture is too wet,
add a bit more flour.) Heat the grapeseed oil in
a large frying pan. Drop a heaping spoonful of
the mixture into the oil and press down with a
spatula to flatten. Fry until brown and crispy
on the edges, cooking each side for about 3–5
minutes. Drain on paper towels placed on a
large platter and keep warm until serving.

We also served a refreshing Fruit Salad, with strawberries, blackberries, pears, bananas, pineapple, apples, and oranges. (To keep the apples and pears from turning brown, sprinkle with lemon juice.) 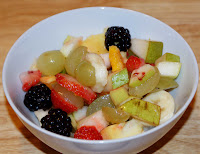 We finished the meal with Two-crust Apple Pie. This can be prepared the evening before. It is easy to make and not too heavy or sweet--a lovely way to complete the feast.
from the film What's Cooking?
4 med. Granny Smith apples
⅔ c. sugar
¼ c. all-purpose flour
½ tsp. ground nutmeg
½ tsp. ground cinnamon
pinch of salt
2 Tbsp. butter, very cold
Preheat the oven to 425°F.
Peel, core, and slice the apples, making the
slices as even as possible. Mix the sugar, flour,
nutmeg, cinnamon, and salt in a large bowl.
Stir in the apples, and pour into a pastry-lined
pie plate. Dot with very cold butter, and cover
with the top crust, sealing the edges. Cut slits
in the top for venting.
Bake for 40–50 minutes until golden brown. 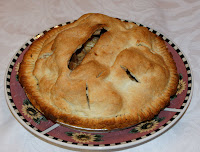