Another "food" film that has nothing to do with food:

Waitress: Breakfast of Champions!
Hoover: You said that the last time you brought me my martini.
Waitress: I say it every time I serve a martini, Mr. Hoover.
Hoover: Oh, that’s probably why God invented these little small towns, so people could keep saying the same stupid jokes over and over again.
Waitress: I just like to cheer people up, that’s all.
Based on the best-selling novel of the same name by Kurt Vonnegut Jr., Breakfast of Champions has little if anything to do with breakfast or food of any type. It is an outrageous story about Dwayne Hoover (Willis), owner of a landmark car dealership, and his quest for the meaning of life. Simultaneously, it is the tale of Kilgore Trout (Finney), a washed up science-fiction novelist, and his search for an audience who appreciates his writing. Hoover and Trout collide in Midland City, where Trout provides Hoover with a reason to continue living, and Hoover provides Trout with a “leak” (mirror) into a younger, more beautiful existence. 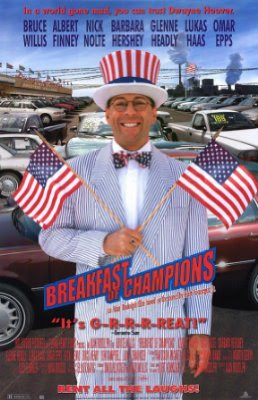 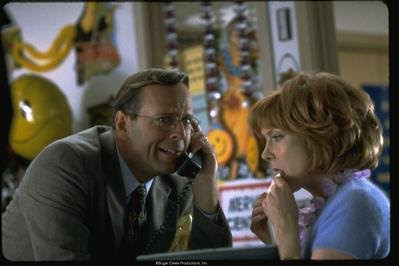 Fun Facts
Kurt Vonnegut makes an appearance in the film as the director of the commercial for the car dealership. He also created the self-portrait hanging in Rosewater’s office and drew the illustrations featured in the opening credits and notes.
Below: Bruce Willis as Dwayne Hoover, with Kurt Vonnegut Jr. (left) and Alan Rudolph (right). 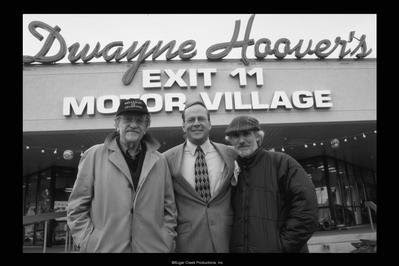 Below: Albert Finney as Kilgore Trout. 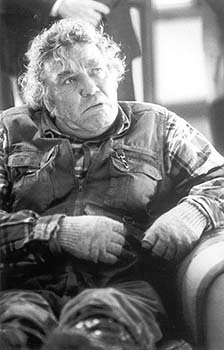