"Vatel" and the Excesses of the French Court 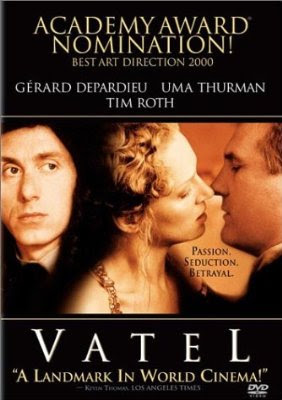 The film Vatel features one of my favorite witty put-downs, spoken by the queen's lady-in-waiting Anne de Montausier to the king's steward Lauzun:
Lauzun: The king sends you his compliments. And he begs the favor of taking a cup of chocolate with you in your room at midnight.
Anne: With me?
Lauzun: May I offer you my congratulations? Although, as you can imagine, this came as a great blow to me. After tonight, I cannot hope for deliverance from the pain of my own desires. So, may I suggest … my rooms at 10:00?
Anne: Alas, monsieur. Ten o’clock, I have an even more attractive offer. Her Majesty has asked me to delouse her spaniel.
But that's not why we've included Vatel in our research for Cooking with the Movies. Based on a true story, Vatel is a film that not only features some astonishing cooking, but it is a testament to the human spirit of ingenuity, not to mention the striving for freedom that would eventually bring down the French monarchy.
François Vatel (Depardieu) is the master steward of the debt-ridden Prince de Condé (Glover), who plans to use Vatel’s culinary and theatrical talents to win a commission as General of the French Army in the war against the Dutch. The scheme works all too well for the prince, who receives the post he desires but wagers, and loses, Vatel’s services in a card game with the Sun King (Sands).
The film is sumptuous in every detail, from the costumes to the elaborate “stage” sets to the astonishing variety of food: fish and goose and lobster, oranges and pears and apricots, custards and chocolates and candied grapes and spun-sugar confections. A “magician” in the kitchen and elsewhere, Vatel makes up for what his prince cannot afford with amazing feats of improvisation: lacking beef for the meat pies, he creates a mushroom filling that fools the most discerning palates; when the eggs for the custard spoil, he beats sugar into cream to create a fluffy “Chantilly”; upon receiving a shipment of broken glass lanterns, he replaces them by cutting geometric designs into melons to make charming candleholders. He also wins the admiration of the queen’s lady in waiting, Anne (Thurman), inspiring her to abandon her shallow life at court, though he is not able himself to make the same escape. 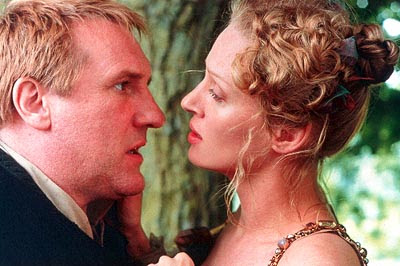 Vatel: On Friday, the fish banquet will be presented on a sea of ice—Neptune’s tribute to Helios, the sun god.
De Condé: The king will catch cold.
Vatel: No, my prince. The braziers will be lit one hour before the banquet.
De Condé: Then the ice will melt.
Vatel: I have forbidden it to melt, my prince.
De Condé: (laughing) Well, our fate is in your hands. 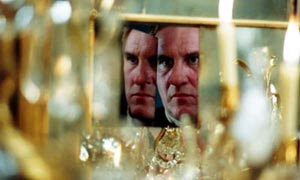 Demaury: More than half the eggs are addled. We can’t make the custard.
Vatel: Watch. (beating sugar into cream) The sugar will come out like beaten egg whites. If they ask you what it is, tell them it’s an old recipe from Chantilly. 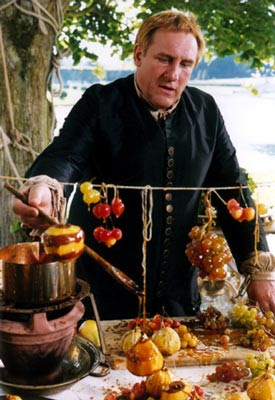 Vatel: Harmony and contrast. All beauty comes from those two things. … Few objects are beautiful or ugly in themselves. To know that is the beginning of being an artist.