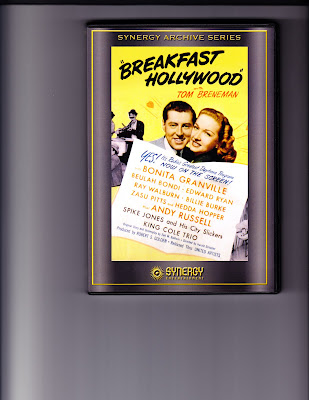 Set in Hollywood in 1946, Breakfast in Hollywood is centered on a morning radio show and the romantic comedy that results when the host, Tom Breneman (Himself), plays matchmaker between audience members Dorothy Larson (Granville), who is looking for her fiancé, and Ken Smith (Ryan), who falls for Dorothy, knowing that her fiancé has married someone else. Although listeners tune in to a “breakfast” show, filmgoers glimpse only coffee and donuts, with other breakfast offerings only hinted at. Though light fare, the movie features entertaining performances by Spike Jones and His City Slickers, Nat “King” Cole and the King Cole Trio, and crooner Andy Russell, not to mention splendid character studies by Billie Burke, Zasu Pitts, and Hedda Hopper—the last of whom appears wearing a fishbowl hat!

Mrs. Annie Reed: Oh, excuse me, is this seat taken?
Elvira Spriggens: No. No, I came alone too.
Reed: Well that’s nice, so did I.
Spriggens [speaking of her odd hat]: I didn’t want to embarrass anyone.
Reed: Why don’t you put a clove in your mouth and then nobody will know you’ve been drinking?