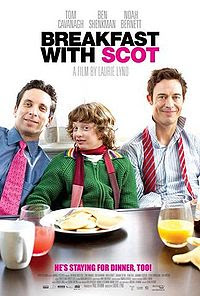 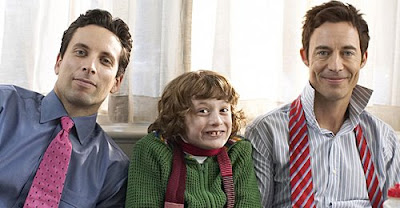 Breakfast with Scot is a family comedy that shows what happens when an “in the closet” gay couple become guardians of their flamboyantly gay preteen nephew. Because Scot (Bernett) is so undeniably “not straight,” the men, former-pro-hockey-player-turned-sportscaster Eric (Cavanagh) and sports lawyer Sam (Shenkman), must confront their own homophobia in order to accept and nurture the newest member of their family.
Despite the title, Breakfast with Scot features only three very short breakfast scenes, which encapsulate the relationship between Eric, Sam, and Scot. In the first, Scot is preparing pancakes shaped like the letter “T”—because his mother spelled his name with only one “T”—and the men find the very idea of shaping pancakes to be unacceptably bizarre. In the second scene, Scot has been stripped of everything that makes him different, and the pancakes are plain and simply round. In the third, having accepted Scot’s wonderful uniqueness, the adults themselves are cooking shaped pancakes: Christmas trees, with colored jelly candies for decorations—and they allow Scot to pour the maple syrup.

Fun Facts:
By allowing the director to use jerseys, game clips, and memorabilia belonging to the Toronto Maple Leafs, the National Hockey League became the first professional sports organization to endorse a gay-themed film. 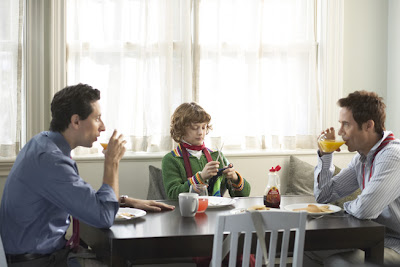