As with many memorable titles, the name of this movie (and the book upon which it is based) has multiple meanings, subject to the viewers’ (or readers’) interpretation.
First, it’s important to know that the people of Mexico have been making chocolate drinks for millennia. Chocolate is made from cocoa, a product of the seeds of the cacao tree (Theobroma cacao). Originally native to the low Andean foothills and the Amazon and Orinoco River basins, the cacao tree grows to a height of 25 feet and requires humid conditions, regular rainfall, and good soil in order to thrive. The Mayan people brought cacao to Central America, and cocoa became an important cultivated crop of the Toltecs and the Aztecs who inhabited the lands of Mexico. The Aztecs were great lovers of cocoa drinks, called xocoatl in their Nahuatl language, which they flavored with vanilla, chili pepper, annatto, pimento, and other spices. In fact, the word chocolate comes from the Nahuatl word for this drink, xocoatl. But cocoa was somewhat of a luxury item: it takes 300 to 600 cacao seeds to make 2 pounds of cocoa paste, but a mature tree yields only about 20 seed pods in a year, and each pod contains only 20 to 40 seeds—so one tree would produce less than 4 pounds of cocoa paste. In fact, the Aztecs used cacao seeds as a form of currency. In addition to their relative scarcity, cacao seeds were also prized because they contain theobromine, a stimulant similar in effect to caffeine. In addition to preventing fatigue, cocoa was also believed to promote health—and with good reason, for it has about twice the anticancer antioxidants of red wine and three times those of green tea. The Spanish conquerors of Mexico knew a good drink when they tasted it, and soon consumption of cocoa spread throughout the world. Cocoa’s association with Xochiquetzal, the Aztec goddess of fertility, didn’t hinder the drink’s popularity either.
Europeans took to mixing the extract of the cocoa seeds with milk and sugar to make chocolate, but the Aztecs used water instead of milk, and their Mexican descendants have continued to follow the ancient recipes, mixing the cocoa extract (sometimes known as chocolate liquor) into boiling water. “Water for chocolate,” then, is literally water that has reached its boiling point, and the phrase “like water for chocolate” describes a condition of intense heating, to the point of boiling. Some translators feel that the phrase como agua para chocolate should be rendered in English as “like water for hot chocolate”—emphasizing that what’s really important is the high temperature involved.
By analogy, an emotion or situation that is “like water for chocolate” is one that is boiling, perhaps ready to explode. It is a metaphor that describes a state of extreme or hot passion—perhaps from anger or bitterness or frustration. It is also a metaphor for a state of sexual arousal—just as the water is hot enough to receive, melt, and absorb the chocolate, so the lover is aroused and ready to receive, embrace, and transform the beloved.
For viewers (or readers) accustomed to making hot chocolate with milk, the phrase like water for chocolate can also imply a diluting or a watering down of the chocolate—by analogy, a loss of something that is essential or definitive in nature, making the person less than he or she could have been.
In one sense, the film’s (and book’s) main character, Tita, confronts situations that are “water” to her “chocolate,” that threaten to dilute or weaken her spirit. At the same time, Tita herself is that “water” for the problems she encounters, hot enough to dissolve and refine them within herself, in the process becoming much more than either “water” or “chocolate” alone could ever be.

This is our favorite recipe from Like Water for Chocolate: Codornices en Pétalos de Rosas (Quail in Rose-Petal Sauce)--as delicious as it is beautiful: 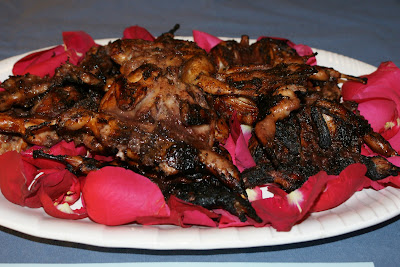 Posted by Anthony F. Chiffolo and Rayner W. Hesse Jr. at 7:20 AM

eToro is the best forex trading platform for beginning and professional traders.