As part of our research for Cooking with the Movies, we have been reaching out to the people (actors, directors, screenwriters, and so forth) who were involved in the films we are including in our book. Our first interview was with movie star Lainie Kazan, best known for her role in My Big Fat Greek Wedding but included in our research because of her starring appearance in What's Cooking?

As you will recall from our previous post, What's Cooking? depicts the Thanksgiving dinners of four ethnically diverse Los Angeles families (it was directed by Gurinder Chadha, whose other films include Bend It Like Beckham). Ms. Kazan plays the role of Ruth "Ruthie" Seelig, the Jewish mother who deftly guides her family through the "traditional" Thanksgiving drama of "secrets kept, secrets revealed"--in this case, trying to downplay her daughter, Rachel's, long-term lesbian relationship with Carla and, between the turkey and the dessert, trying to come to grips with Rachel's announcement that she is pregnant, and that her brother's wife's gay brother is the father. It's a wonderful moment, both funny and moving, and Ms. Kazan provides the foundation that holds the family together. 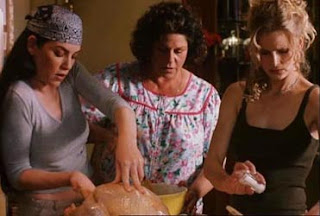 "We ate all day!" Ms. Kazan exclaimed with enthusiasm. "From early, early in the morning to late night, it was a full day of dining. I never wanted to eat again!" One can certainly understand the "fullness" of the experience, for the Thanksgiving meal her character serves includes the traditional turkey with stuffing (bread, carrots, and celery), cranberry sauce, sweet potatoes with marshmallows, oat bran rolls, and apple pie, plus some unusual additions: roasted polenta with peppers, Chinese chicken salad, and noodle kugel. As Ms. Kazan explained, the film is about "love and honor and family and how all families have their own style for holiday celebrations, but basically every one is the same."

Her favorite scene? When her character serves cappucino to her daughter and her partner and finds them in bed together--an awkward moment, to be sure, but one with which many parents, and their adult children, can readily relate.

It was interesting to ask Ms. Kazan about the process of acting in a "food" movie. As she explained, there are professionals who do the cooking for the actors, set the scenes, serve the cooked food, and change it often to keep it fresh, yet the actors are also filmed in food-preparation and -serving sequences. Since the script calls for a true depiction of a Thanksgiving dinner, the actors have to eat--and sometimes eat and eat, depending on how many "takes" are required for the director to be satisfied. When "wine" is served on screen, it is actually watered-down juice. Trademark rules prohibit the showing of any brand names or labels in the film (though we think we did catch a glimpse of one!). Surprisingly, Ms. Kazan's film "family" did not meet with the other three film families until the day of the final scene--even though the family stories were intertwined throughout the movie, each family worked independently.

As a surprise, the director prepared a treat for the entire cast: a turkey cooked with yogurt and Indian dressing and spices. Ms. Kazan thought it simply fabulous: "I took that recipe and made it for Thanksgiving that year--it was absolutely scrumptious."

It's clear that Ms. Kazan thoroughly enjoyed making What's Cooking? "It received great comments from so many people who saw it. But it didn't get enough exposure." Perhaps our re-creation of these meals for our book will help bring it the attention it deserves.
Posted by Anthony F. Chiffolo and Rayner W. Hesse Jr. at 11:52 AM No comments: