Looking for some dishes to enhance your Cinco de Mayo celebration? The following recipes are based upon the meals featured in the great movies Like Water for Chocolate, What's Cooking?, and Tortilla Soup. From soup to salad to main course to dessert, here's a "one stop" menu for a festive holiday. 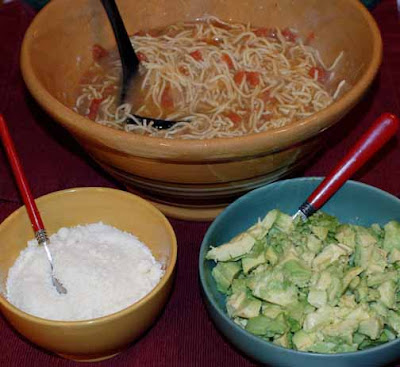 
In a large pot, bring the stock to a boil. Add the tomatoes, garlic, onions, and chili pepper and bring to a boil again. Reduce the heat to a simmer.


Stir in the spices and cook on a low heat, covered, for 30 minutes.


Break the fideo strands into thirds, and add them to the pot. Cook for 6 minutes on a medium heat. Remove the bay leaves. Spoon out into small bowls. Serve with grated añejo and a slice of avocado. 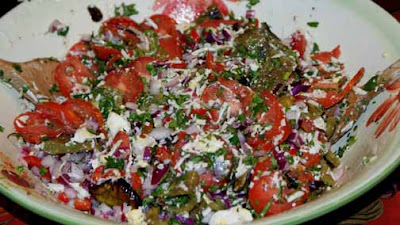 
Preheat oven to Broil. Place the cactus paddles in a bowl and coat them on both sides with a bit of olive oil. Spread onto a cookie sheet and place in the broiler to braise, about 7–10 minutes on each side, until the tops of the paddles begin to turn black.


Remove from the oven and allow to cool. When sufficiently cooled, cut into small strips. Transfer to a large bowl, and add the tomatoes and the onion. Cut a Serrano chili into small pieces, removing the stem and seeds. Add to the salad along with the pine nuts, squash, and cilantro.


Pour the vinaigrette (see next) over the salad.


Refrigerate until serving. When serving, sprinkle with añejo cheese, then toss.


Combine all ingredients and whisk well with a fork. 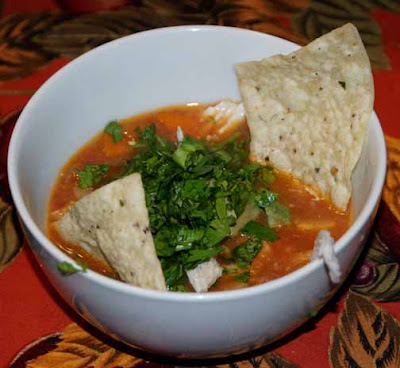 
salt and pepper to taste


In a blender or food processor, puree the tomatoes and garlic until smooth. Set aside.


In a large pot, heat the olive oil over a low heat. Add the onions, carrot, celery, cumin, salt, and pepper, then cook for about 10 minutes, stirring frequently. Mix in the tomato/garlic puree and cook for 10 minutes longer, stirring to ensure that the sauce does not burn.


Add the chicken stock, chilies, lime juice, and black beans to the pot. Bring to a boil, then reduce to a simmer and cook, uncovered, for 20 minutes. Stir in the tortilla chips and chicken, then cook for 10 minutes more until the chips soften.


Serve hot with cilantro, avocado, cheese, and extra crisp fried tortilla chips set up as side dishes for folks to add their own garnishes. 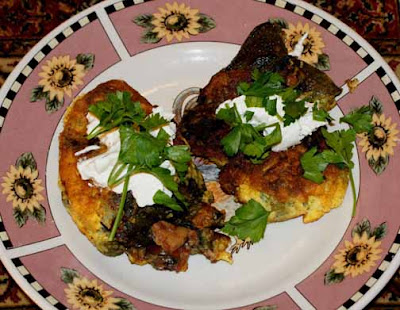 
Roast the chilies and remove the skins and seeds. (Do not cut them in half, as they are going to be stuffed.)


Fry the onion and garlic in the olive oil until glossy; add the pork and brown, stirring frequently. Stir in the apple, peach, tomatoes, walnuts, all the spices, and the vinegar, and cook for about 5 minutes. Stuff the chilies with the walnut mixture.


Beat the egg whites until stiff; lightly beat the yolks, then add into the whites. Dredge the chilies in flour and dip in the egg mixture. Fry in butter, turning frequently so that they brown evenly. Drain.


Serve each with a bit of sour cream, garnished with cilantro and pomegranate seeds. 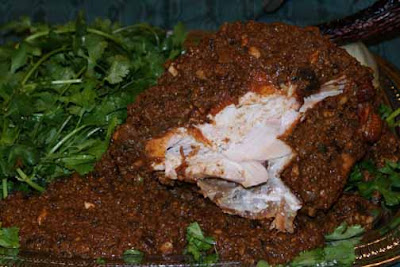 
Preheat oven to 350°F. Place turkey, breast-side up, in a large baking pan. Stuff the onion inside the turkey cavity. Pour the melted butter over the bird, and sprinkle the salt and pepper over it. Surround the breast with apple cider (or brandy, whichever one is using). Bake, uncovered, for 2 ½ –3 hours, basting occasionally.


While the turkey is cooking, puree the tomatoes, tomatillos, chili peppers, avocado, and banana; place the mixture in a large pan, and add the chicken stock. Bring to a boil, then simmer until it is reduced to about half the liquid content. Remove from the heat and set aside. Stir in the raisins.


In a large skillet, dry roast the sesame seeds; when finished, reserve them for use later.


Add the olive oil to the pan, and fry the garlic and onions until lightly browned; crumble the hard roll into the mix, stir, and remove from the heat. Set aside.


In a separate pan, fry the pumpkin seeds and nuts with the chili powder, allspice, and cloves until well heated, then add the extract and 1 tablespoon of water until mixed thoroughly. Steal ½ cup of the turkey drippings from the oven and add it to the frying pan, whisking the mixture into a kind of light gravy.


In a large pot, combine the stock, garlic, onion, bread, and all the gravy ingredients. Add the cinnamon stick, brown sugar, and vinegar. Allow the sauce to thicken, stirring occasionally so that it does not burn (about 20 minutes).


Grate the chocolate into the sauce, and allow it to melt, floating on top of the sauce. Cover until one is ready to present the turkey.


Pour the sauce over the turkey, sprinkle with sesame seeds, and serve.

Preheat oven to 350°F.
Melt the sugar over medium heat until caramel colored. Pour into a 9" round glass baking dish, coating the bottom and sides.
In a large bowl, beat the yolks until light yellow in color. Add the condensed and evaporated milks and the vanilla, and beat until very smooth. Pour mixture into the baking dish. Set inside a larger pan; add water so that it comes up as much as possible around the edges of the flan pan.
Bake for 50 – 60 minutes. Remove from oven and allow to cool completely. Refrigerate overnight.
To serve, invert the flan onto a plate with high sides. Surround with edible flowers for decoration.

All recipes are from Cooking with the Movies: Meals on Reels.
Posted by Anthony F. Chiffolo and Rayner W. Hesse Jr. at 2:12 PM 35 comments: