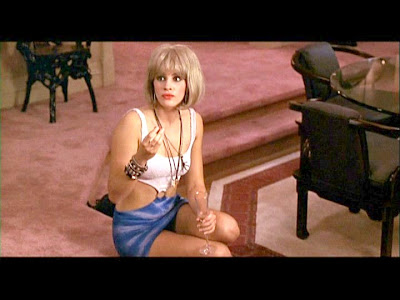 Edward: You should try a strawberry.
Vivian: Why?
Edward: It brings out the flavor of the champagne.
Vivian: Oh. Groovy.
Edward: Are you hungry? You must be. Why don't you sit and have something to eat. I took the liberty of ordering everything on the menu. I didn't know what you'd like. 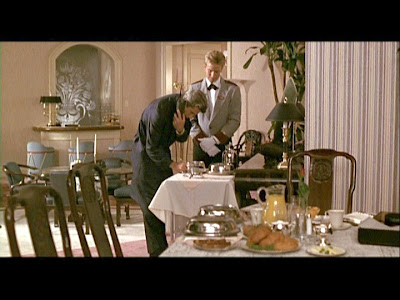 A "fairy tale" of a romantic comedy, Pretty Woman is more famous for the love scenes between screen idols Julia Roberts and Richard Gere, but the film does have two important food scenes that many moviegoers remember with great fondness. In the first, Edward (Gere) orders champagne and strawberries for Vivian (Roberts), the prostitute he hires. Unused to fine dining, Vivian downs the champagne before Edward can offer her the plate of fruit; only slightly embarrassed, Vivian takes and tastes one berry, so red and large and luscious to symbolize both the sexual basis of their business arrangement and the vast romantic potential underlying their liaison. It's a humorous exchange that is at once awkward and self-conscious, yet sexy and romantic, and viewers who have ever had "stars in their eyes" immediately relate to what the characters are feeling. In the second scene, which takes place the morning after their first night together, Edward orders everything on the menu for breakfast--orange juice, croissants, toast, peaches, pancakes and strawberries, scrambled eggs with bacon and kiwi, muffins--because he wants Vivian to have something she'd enjoy, and he doesn't know what her preference is. It's a touching moment, revealing how much he cares for her--but then, wouldn't anyone want to be treated so richly? 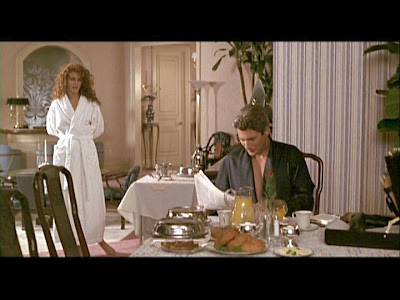 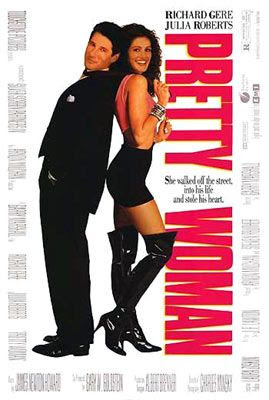 Posted by Anthony F. Chiffolo and Rayner W. Hesse Jr. at 11:05 AM No comments:

What a Birthday Cake! 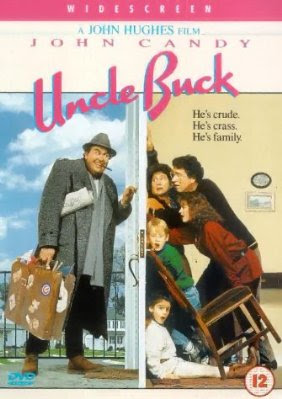 Buck Russell [to young Miles, who is gawking at his birthday breakfast]: You should see the toast. I couldn't even get it through the door.
Uncle Buck is a fun movie that shows what can happen when a bachelor uncle has to babysit his brother's rebellious teenage daughter and her younger brother and sister. But the film is worth mentioning because of the amazing birthday breakfast. To celebrate his nephew's birthday, Buck (John Candy) decides to prepare a special breakfast treat: a huge cake made out of five enormous pancakes. Each flapjack is about three feet in diameter, and to make them, Buck flips them over on the griddle with a snow shovel. He places a thick slab of butter on top of the stack, drenches everything in maple syrup, and lights a single candle in the middle. When birthday boy Miles (Macaulay Culkin) enters the kitchen and takes in this wonderful creation, he grins with absolute delight. It's an oh-too-sweet feast that only the young (and the young at heart) can fully appreciate. 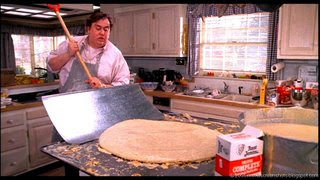 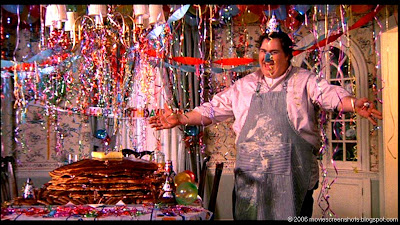 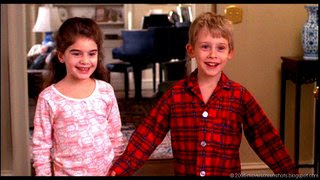 Fun fact: For the scene in which Miles interrogates Uncle Buck in rapid-fire fashion, John Candy pasted the dialogue on top of his head so that Macaulay Culkin could read his lines quickly and not trip over his own words.

Henry: Please stay for supper, Pike.
Pike: Why?
Henry: Look at the size of this trout.

The directorial debut of Thomas Bezucha (who also directed The Family Stone), Big Eden was a breakthrough film that finally depicted gay men of all shapes, sizes, and ages navigating the treacherous waters of love just like regular folks, with no over-the-top drama or circuit boys or any other stereotypically “gay” details thrown in just for laughs. When Henry (Gross) visits his hometown in rural Montana to care for his ailing grandfather, he discovers that Dean (DeKay), his high school “crush,” has also recently returned home. But while Henry pursues Dean (without actually coming out of the closet), Pike (Schweig), the owner of the general store, falls “head over heels” for Henry. Since Pike is too shy to approach Henry directly, he decides to learn to cook and proceeds to prepare dinner for Henry and his grandfather, surreptitiously substituting his dishes for the ones made by the widow Thayer (Martin). Despite promptings from his friends in town, it takes Henry a long time to get over his obsession with his straight friend Dean and to realize his affection for Pike and understand Pike’s for him.
“So, what’s for eats?” Henry asks, and the audience is richly rewarded with a parade of amazing dishes. At the same time, the film’s depiction of Pike’s progress in the kitchen serves as a real culinary education. He begins by reading The Joy of Cooking, and it remains his “bible” throughout the film; but he also refers to Cooking Light, Gourmet, and Food & Wine magazines, creating tasty dishes because he wants “things to be nice” for Henry. The film shows many of Pike’s creations—chicken with apricots, olives, and figs; stuffed green peppers; mushroom and spinach salad; baked salmon garnished with radishes and celery; steamed clams; curly endive and cucumber salad; chicken with carrots, celery, and beans; trout poached in white wine (he sends his friends out to the stream to catch the trout!); mushroom soup—and the viewer even hears tell of a delicious peach sorbet (made in Montana, in the winter!). 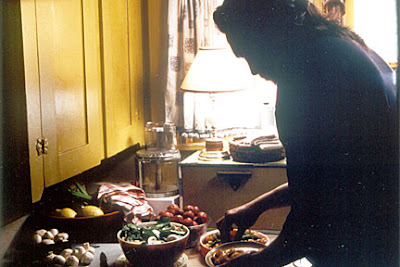 No movie about familial relationships would be complete without a Thanksgiving meal, and Big Eden depicts the usual dysfunctional gathering, with all the trimmings: turkey, green beans, biscuits, potato salad, and cherry and pumpkin pies. The masterpiece of this meal, however, is the platter of endive, asparagus, yellow and orange peppers, and bean sprouts. 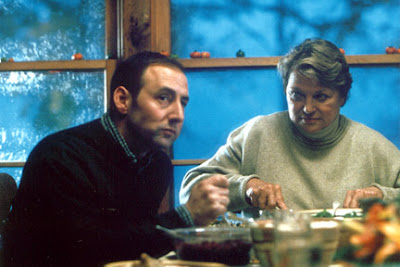 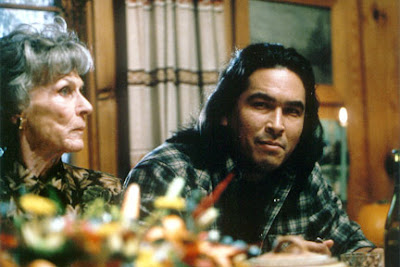 Other foods are mentioned: cappuccino, cottage cheese and sour cream pancakes, burgers with onions or cheese or chili, ribs, corn on the cob, watermelon. The plot hinges on Henry’s discovery of who actually made the delicious torte he discusses with Mary Margaret (Cox): he thinks it was the widow, just as he believed all along that she was preparing dinner for him and his grandfather, but when she admits that the food was not hers, Henry finally opens his eyes and begins to accept the love that is being showered upon him. The way to a man’s heart truly is through his stomach! 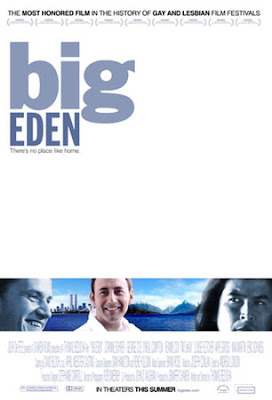