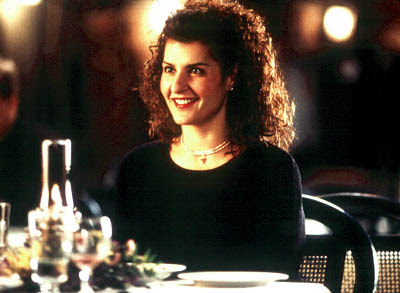 My Big Fat Greek Wedding is another in a long history of wedding comedies that understand the significance of food. Like many Mediterranean cultures, Greek life centers around food and family, and sometimes it’s difficult to figure out which comes first. While putting family life and conflict squarely center stage, this film does not neglect the foods that are such a central feature of Greek life. The Portokalos family operates—what else?—a Greek diner called Dancing Zorba’s. Toula’s mother sends her kids to school with moussaka (a minced meat pie with tomatoes and eggplant) in their lunch bags. When meeting the parents of Toula’s fiancé for the first time, Maria Portokalos serves spanakopita (pie with spinach, feta cheese, onion, eggs, and seasonings) and lamb roasted on a spit, even though the guests are the stereotypical WASP family and not prepared for the effusiveness of their Greek in-laws-to-be. As one might glean from these examples, these Greeks like to feed people—in fact, it’s a point of hospitality with them to make sure that no guest has an empty plate and that no one goes home hungry! 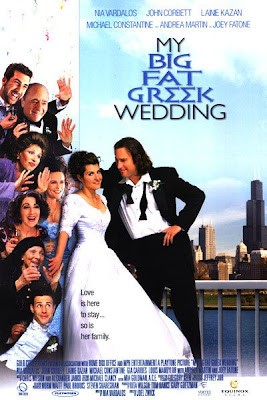 Toula: My mom was always cooking foods filled with warmth and wisdom…and never forgetting that side dish of steaming-hot guilt.
Maria Portokalos: Niko, don't play with the food. When I was your age, we didn't have food. 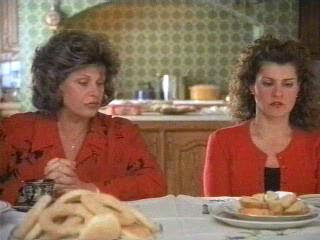 Gus Portokalos: I was thinking last night … the night before my daughter was going to marry Ian Miller … that the root of the word “miller” is a Greek word. And “miller” come from the Greek word milo, which is mean "apple." There you go. As many of you know, our name Portokalos is come from the Greek word portokali, which means "orange." So, okay here tonight, we have apple and orange. We all different but, in the end, we all fruit.

Fun Fact:
Nia Vardalos originally developed the concept for this film as her own one-woman stage show. 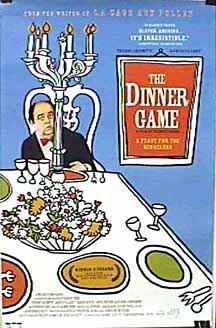 Pignon: Sometimes I feel you think I’m an idiot. 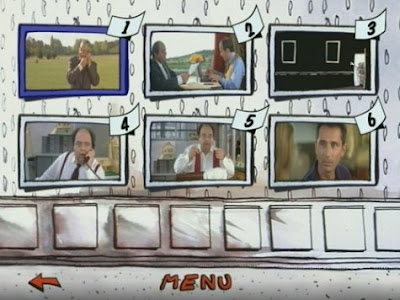 The Dinner Game is a laugh-out-loud comedy in which the haughty practical jokester brings about his own ruin. The “dinner” in the film’s title refers to the weekly gathering of a group of friends who invite the stupidest men they can find as companions, mock them during the course of the evening, and then vote to determine who brought the biggest idiot that week. However, the table is turned when one of the key players, Brochant (Lhermitte), throws out his back and must spend the evening in the company of his “idiot,” Pignon (Villeret), a tax auditor who constructs architectural models out of matchsticks. Pignon’s every effort to help Brochant, a wealthy publisher, leads to one catastrophe after another—“He drives your wife into adultery and you into a tax audit. What a feat!”—mistaking Brochant’s wife for his mistress, revealing Brochant’s tax evasions to the city’s leading tax auditor, and further injuring Brochant’s back along with his pride. The only food shown in this French farce is an omelet with fines herbes, along with a vintage bottle of wine deliberately ruined by the addition of vinegar, but it nevertheless provides a full menu of hilarious scenes. 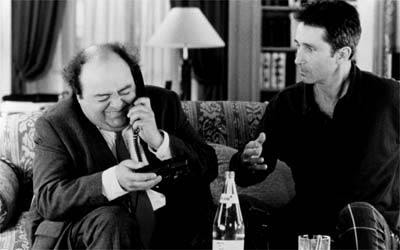 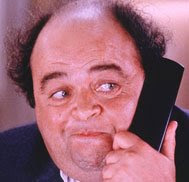 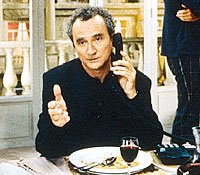 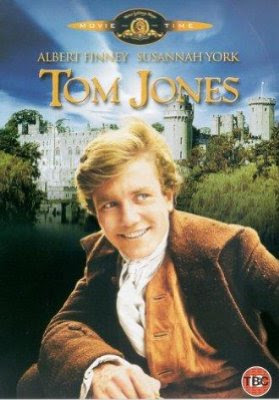 Miss Western: You are such a boor.
Squire Western: A boar? I am no boar! 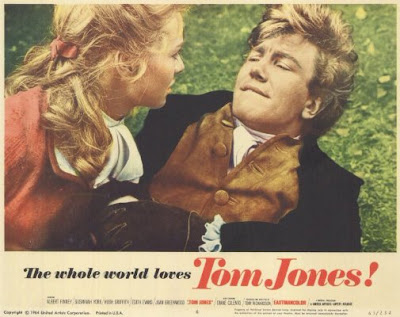 Though not known as a food film, Tom Jones does have a quite memorable dinner scene, which serves as a quite arousing bout of sexual foreplay for Jones (Finney) and Waters (Redman). Beginning with soup, bread, and beer, they proceed to lobster, chicken, beef, and oysters, consumed with the most suggestive gestures and facial expressions, including the splitting of the chicken’s “wish bone” with their pinkies. The completion of the meal—consumption of pears in a most indelicate manner, and a wine toasting with arms entwined—is merely the prelude to what the viewer can only imagine as an entertaining and sexually gratifying romp in Mrs. Waters’ bed upstairs. 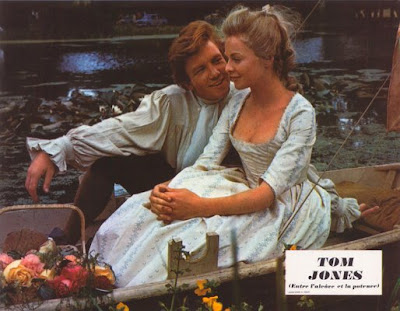 
Fun Facts
The director allowed Finney and Redman to improvise much of the dinner scene; given the gusto with which they consumed so much food, it’s not surprising that they suffered digestively for days afterward. 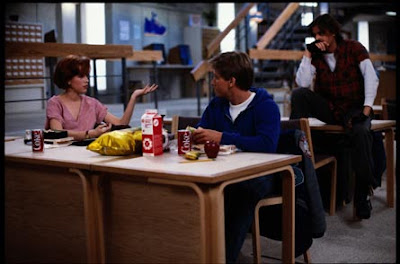 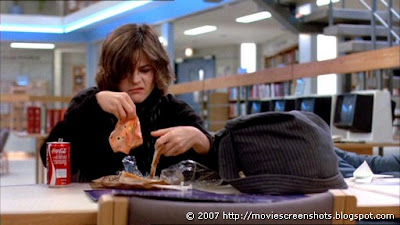 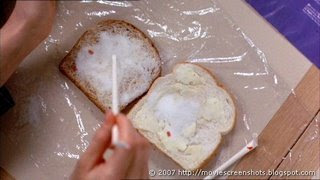 Contrary to expectations, The Breakfast Club is not about a group that meets for breakfast, nor does it feature any breakfast food. It is about five high school kids who are assigned to detention in the school library one Saturday. The students are a motley crew, and over the course of the day they become acquainted by sharing their stories, manipulating the detention monitor, and commenting on the contents of one another’s lunches: Claire, the rich kid, lays out sushi with soy sauce; Andy, the wrestler, unpacks three sandwiches, potato chips, milk, a banana, an apple, and chocolate cookies; Brian, the geek, feasts on soup, a peanut butter and jelly sandwich, and apple juice; Allison, the freak, makes a “sandwich” of Cap’n Crunch cereal topped with Pixie Stix; and John, the “bad boy,” has nothing. Such a menu begs the question “Are we really what we eat?” – or do we, perhaps, eat what we already are.

John Bender: Well, Brian, this is a very nutritious lunch. All the food groups are represented. Did your mom marry Mr. Rogers?
Brian Johnson: Uh, no. Mr. Johnson. 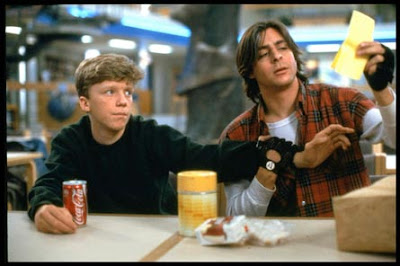 Released February 15, 1985
Written and directed by John Hughes
Starring Molly Ringwald as Claire Standish, Emilio Estevez as Andrew Clark, Anthony Michael Hall as Brian Johnson, Ally Sheedy as Allison Reynolds, Judd Nelson as John Bender, Paul Gleason as Richard Vernon, and John Kapelos as Carl
Fun Fact:
“The Breakfast Club” was the name of one of the longest-running radio shows in U.S. history, broadcast in Chicago from 1933 to 1968. It was, perhaps, the inspiration for the nickname of the group of students assigned to detention at Chicagoland’s New Trier High School, attended by the son of one of John Hughes’ friends. 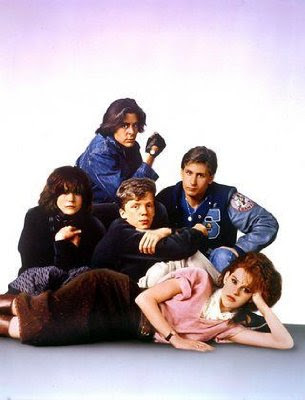 Armand: Pull yourself together!
Agador: Why?
Armand: Because you have to start cooking dinner, OK?…. [Exits]
Val: Can you ... you can cook, right?
Agador: Your father seems to think so. 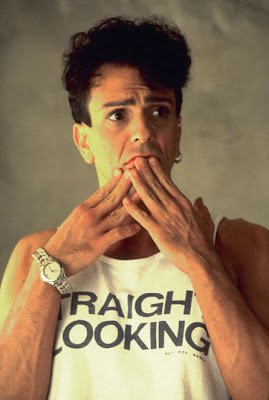 The Birdcage doesn’t feature much in the way of food—some toast and butter, a cup of coffee, a catch-all stew—but it does have that infamous dinner scene with naked Greek boys playing in the soup bowls! To be clear: when Armand (Williams), Albert (Lane), and Val (Futterman) sit down to dinner with their future in-laws the Keeleys (Hackman, Wiest, and Flockhart), the table is set with what is probably very expensive china, of a “pattern” portraying nude young men at play, in scenes reminiscent of the decorations on ancient Greek pottery. Neither the viewer nor the guests ever really get to see the young Greeks—by the time the Keeleys find their reading glasses, Armand has filled the bowls with Agador’s (Azaria) Guatemalan peasant soup (though without the shrimps). Both the spiciness of the soup and the hosts’ desire to disguise their identity as a gay couple drive the diners from the table before they can even empty their bowls—or glimpse the gaiety of their Greek table companions. 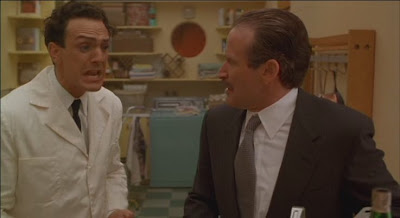 Louise Keeley: What interesting china! Why, it looks like young men playing leapfrog. Is it Greek?
Albert: (squeals) I … I … I have no idea. I’ve never seen these bowls before….
Senator Keeley: It is Greek. Greek boys, actually. Uh, naked Greek boys.
Albert: And girls. Don’t you have any girls on your bowl
Val: I have one.
Albert: So do I! Oh, look! Senator Keeley, there. I think that’s a girl.
Senator Keeley: Then it’s been a long time since you’ve seen one. That’s a boy. I may need glasses, but I can see that. 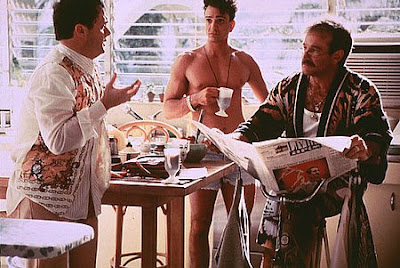 Fun Facts:
When Armand (Williams) is trying to teach Albert (Lane) how to comport himself in a more masculine manor, they practice buttering a piece of toast—and Albert shrieks when he presses too hard and breaks the toast in pieces. The hilarious scene caused director Mike Nichols to laugh so loudly that he had to be covered with a sound blanket in order for filming to continue. 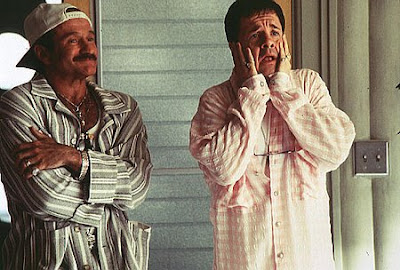 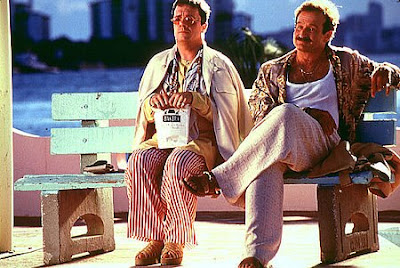 If you look closely during the dinner scene, you can catch a really quick glimpse of the Greek boys before Armand covers the illustration with the soup. The scene portrayed on the bowls is quite explicit, in a homoerotic way. But finding a photo of the bowls has proven impossible. To get an idea of the type of scene covered over, take a look at these reproductions of ancient Greek pottery: 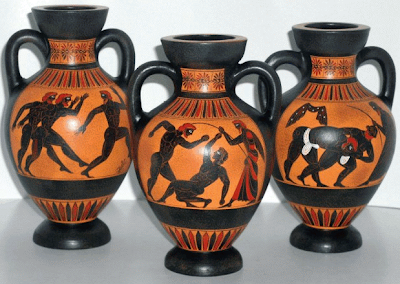 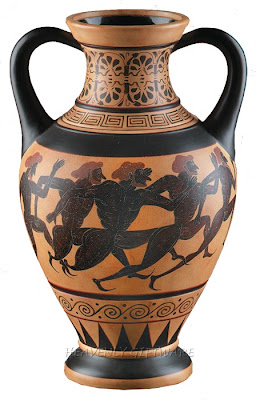