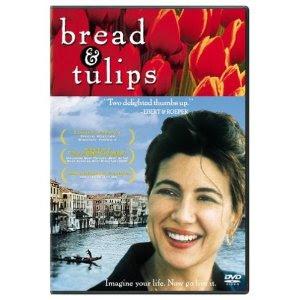 Only in the movies would being left at a rest stop by her tour bus cause a middle-aged housewife to rethink her entire existence and embark on a completely unpredictable and life-changing “vacation.” After waiting for hours, Rosalba (Maglietta) decides to hitchhike home; when one of her rides suggests that she continue on to Venice, she daringly agrees. And then dares to stay as a guest in a stranger’s apartment, to take a job as a florist’s assistant, and to keep putting off her return home to her husband and children.

Although Bread and Tulips does not focus on food, what Italian film can get by without showing at least some fine dining? At the Marco Polo—where Rosalba meets Fernando (Ganz), who becomes an integral part of her experiences in Venice—she dines on white beans (cannellini) with hard-boiled eggs. Because the restaurant’s chef is out with appendicitis, only cold dishes are available, so the next day she selects an anchovy salad with tomatoes, olives, carrots, hard-boiled eggs, pickles, bread sticks, and red wine. Breakfast at Fernando’s consists of bread with jam and butter, an apple, orange juice, milk, sugar cookies, and coffee. Indeed, very little hot food is served during the course of the film—this is extraordinary for an Italian movie. However, in keeping with the unusual nature of the protagonist’s “vacation,” Rosalba dreams that someone has brought her fresh brussels sprouts and a hair dryer to cook them with: “they cook in no time,” the dream figure announces—a line that seems to encapsulate the movie’s theme, that sometimes a settled life needs no time at all to change directions because it was never really settled in the first place. 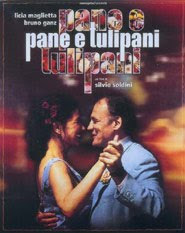 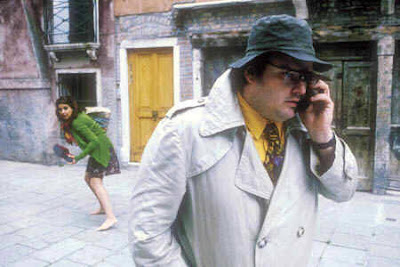